Yosuke Yamashita co-starred with legend Cecil Taylor who he was a longing.

They talked together about music four hours in Cecil’s home in NYC.

There was a musical score written in an alphabet. 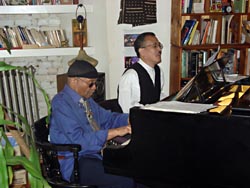 In September 2006, at the home of Cecil Taylor

He had began playing piano and Cecil Taylor sat next to him.

So he played a duet without his noticing it.

Then they had meeting several times for Cecil’s Japan concert.

He enthused about their rehearsal on that occasion on a radio broadcast.

Their duo concert was scheduled to be 45 minutes.

They did a rehearsal about 90 minutes.

He had good enough at that rehearsal,but Cecil Taylor was not satisfied.

After a toilet break they also did a rehearsal about 90 minutes.

He said that it was most difficult to end in free jazz improvisation.

He is a lecture theme of the university for two minutes of Encore.

Now he lectures a class of Kunitachi College of Music about “Encore of two minutes”.

He wrote an article for The Nihon Keizai Shinbun about Cecil Taylor.

This is Yosuke Yamashita plays Greensleeves