Some Jazz fans were fond of 2-inch Victor recording with Bunny’s band,on August 7, 1937.

Thanks largely to the popularity of Berigan’s version,” I Can’t Get Started” became popular standard song.

Unfortunately Berigan was compelled to play it almost nightly.

Request of some audience might have hastened his death. 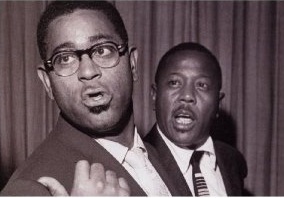 Photo above of Roy Eldridge and Dizzy Gillespie

Photo above of Harry James from OKMusic

Berigan trumpet style had an influence many of the major trumpet players who Roy Eldridge, Harry James and Dizzy Gillespie.

Also Berigan’s recording(1937 Victor) was inducted into the National Academy of Recording Arts and Sciences (Grammy) Hall of Fame.

Please see the rare clip that Bunny play and sing with the Freddie Rich band in 1936.